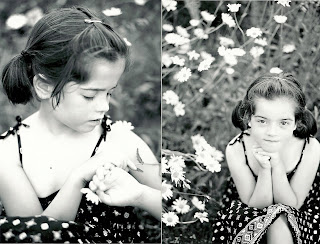 She is the one who weighs on my mind...her sweetness and grace...her sensitivity, at times an asset and at times a detriment...her table manners (ahhem; or lack there of)...her hot temper...her empathy...her animated discussions...her loud piercing screech that plagues my ears, sreaming at times of excitement and during periods of angst...her ideas, that come out one after another like rapid machine gun fire...her desire to help those in need and those less fortunate...she is BRIDGET. She is my daughter. She is my first born.

How to even begin ... how has this life affected her? changed her? She is a willing participant in Joe's care, always desiring to learn more: how to check Joe's blood sugar number, how to bolus, how to carb count. She takes notes on his numbers, transcribes the "Diabetes" section of the World Book Encyclopedia into her polka dot notebook, and diligently studies the Calorie King. She once taped a glass pickle jar to her scooter and went door-to-door, unbeknownst to me, collecting money from neighbors for diabetes research...a sign asking "Please help us find a cure for Type 1" secured to her handle bars. I explained that a glass jar taped to the scooter was perhaps a dangerous choice for obvious reasons...so that ended that round of fundraising for her. This was no matter...you see, she has a whole list of back-up ideas and plans: selling tattoos, a lemonade stand, coins for a cure, cans for a cure...and on...and on.

This disease has had an impact on each of us...perhaps on Bridget more than all. The guilt weighs on me as a parent, it is heavy, it takes its toll. It hurts to be unable to shield her from the unfairness of the attention Joe receives with the day-in, day-out, hour-to-hour care and vigilance that type 1 demands of us...demands of us as a FAMILY. I know it is what it is. This is our journey, our story and it is meant to be. I hope we, as our story unfolds, as it progresses, and in the end...are the better for it...especially Bridget.
Posted by Unknown at 6:34 AM 13 comments:

THE BIKE RIDE (the most boring story ever) 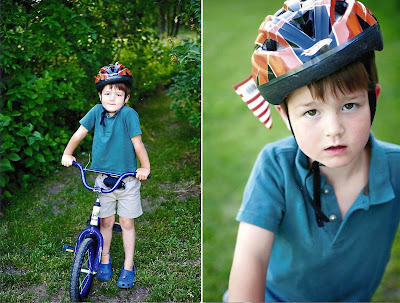 Disclaimer: Do not feel like you need to read this one. I just wanted to document the stop-go, stop-go, boringness of this outing.

Yesterday was a gorgeous day in Vermont.

Joe decided to ride his bike with me while I went on my daily jog.

In order to get ready for a bike outing with a type 1 kid...there are a few things that must be taken care of first. You always want to know what their blood sugar is prior to any activity and then boost the number up accordingly and you need to have your "equipment". The "equipment" usually includes the glucometer (used to get a blood sugar number) and it's supplies and a sugar source...and a cell phone just in case I need back-up... especially after the "passing out" episode Joe had a few weeks ago...see MY LIFE THROUGH THE SNOW GLOBE.

Joe had lunch about an hour before. So we checked his blood sugar (activity can cause a LOW blood sugar reaction); it was 71. So he had a 1/2 cup of milk and a staburst. Next we collected our supplies - glucometer, sugar, and cell phone.

Last year I had tied Joe's camo pack (this is a little camoflouge bag that I believe Elli Lilly makes to hold diabetes supplies) to his scooter when he wanted to scoot while I ran...well, not a good idea. He hit uneven pavement, took flight, and his glucometer suffered it's demise when the scooter crashed into the sidewalk.

So, this time, I had Joe put the glucometer in his coat pocket, I carried the cell phone, and put glucose tabs in my fleece pocket...and off we went....well we only got to the garage, because then we realized his bike tires were FLAT after the long winter in storage. So we got the air pump...it was broken. I had to literally hold the tubing to the pump while Joe pumped the air into his tires. EVENTUALLY we did get them inflated.

A few houses down from our house, I noticed that the glucometer was hanging out of his coat pocket. We stopped and decided that I should carry the glucometer (we don't want another incident like last year) and he would carry my cell phone. After all the gear was passed back and forth...we forged ahead.

We were about a 1/4 mile into the bike ride when Joe is breathing hard, blaming his gear bike for NOT being in the right gear. He insists on having it in first gear ALL the time. I tried to explain that if he up-ed the gear level he would not need to pedal like a maniac to move an inch - ah yeah right. He wasn't listening to me. With all this heavy pedaling...he needed a break and he and I both decided a glucose tab was in order to stave off impending LOWS.

Then, he on his bike and me on my feet take off again...only to make it another 300 feet or so. Joe still in first gear (not on a hill, but on a flat), Joe still pedaling like a maniac, Joe deciding he needs yet another break...not willing to listen to reason on the gear issue. So he decides that we need to play a little "I spy" in the middle of the sidewalk during our rest period...dear lord really?...UGH.... After one round of I spy, in which he spy ed a power line pole...and my guesses were incorrect...we were off again.

Thank goodness the next 1/4 mile or so was down hill, so there was NO pedaling required and therefore little complaint from Joe. On the next flat...pedal....pedal...pedal....like a maniac...getting NO WHERE and still NOT budging on the gear issue.

He was HOT...so he removed his coat. I tried to tie the arms of his little coat around my no-so-little waist and we made a decision it was time to ...

me pushing his bike....him carrying his helmet. We enjoyed the boring mile walk home listening to the...scuttle...scuttle...drag...drag of our feet. It was the LONGEST...most boring bike-jog of my life, but sweet. Mama and her boy enjoying a beautiful day. BTW he was 78 when we got home...not too bad.
Posted by Unknown at 5:53 AM 4 comments: