I know better.  I know better.  I know better.  When pray-tell am I going to do better?   I know that he goes high after the movies.  Yes, I crank-up his basal by 100% for an hour and a half while he sits.  And... yes, I even pre-bolus him for an hour of basal while cranking-up the basal.  And... of course I RAGE BOLUS for the "kiddie combo" of popcorn and fun-sized Skittles.  Post-movie, Joe's blood sugar was a titch over 300.  He corrected, under my instruction ... even though part of me knew he would crash, but the 300 got under my skin.  I could not let it be.  After we arrived home, to add insult to injury (aka "activity to correction") we then proceeded to finish out our afternoon by heading over to our local pool and park via bike.  Joe experienced a significant low an hour later.  By "significant", I mean not only was his number low (in the 50s), but his legs became weak and he was out of sorts emotionally.

Significant lows happen.  Unfortunately, they are not always "convenient" with the pressures of life, parenting, and schedules. 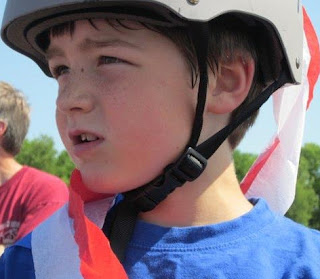 "You are all that is keeping me going."  His voice was strained.  His pedaling slow.

"I would normally be home by now."  His verbage and demeanor cracking.

"This low has me pedaling at 1 mile per hour." Briefly I saw the humor of his Y chromosomal need to quantify the shitty hand that this low dealt him.


Then he cracked as his bike was listing, tears in his voice "I hate diabetes."

"I know buddy.  Do you need more sugar?"

We stopped, straddling our bikes.  Two more Starbursts were unwrapped and mother-birded.  "Can you keep going Joe?  We need to keep going.  Joe we gotta keep going ... we are going to be late to pick-up Bridge."

At this moment I was hating diabetes too.  Once again, it placed me in a position of feeling like an inadequate parent.  On the one hand, I was left pushing my son to keep biking to get home...to get to our car .... so that we could pick-up Bridget from camp.  I know that biking or any physical exertion on his part was detrimental to him and his recovering blood sugar, yet there I was coaxing him to pedal-on in order to make some sort of progress. On the other hand, it, diabetes, was now going to take away a timely showing for Bridget at her first day of camp.

After the Starburst pit stop, the bike riding was not going well.  Joe was too weak to make it up the final two hills to our home.  His number was recovering, but physically he had not "caught up".  So, I had a tough choice to make.  Many of you may question my judgement.  Not sure if it was the right thing.  I ditched him.  I ditched him in a lawn about two to three blocks from our house.  I left him with his bike and Woodchuck (his diabetes supply bag).  "Mom is going to speed home and get the car Joe.  If you feel you are dropping, take more sugar.  I'll be right back."  Leery of my decision and still a bit pissed at the disease, I parted with Joe.

I hauled ass home only to realize that my keys were in Woodchuck (ya know...the "Woodchuck" I left a few blocks back with Joe).  Expletives were flying off the tip of my parched tongue like rapid machine gun fire as I hauled booty back to Joe and Woodchuck.  Upon approaching Joe, I was relieved to see him sitting upright and color returning to his face.  I snatched the keys from Woodchuck and then hauled booty back home and hopped into the car to haul booty back to Joe and then onto haul booty to pick-up Bridget from her first day of camp.

I was 7 minutes late.


A tough choice in our day-in-the-life of managing type 1 diabetes.
Posted by Unknown at 10:51 AM 18 comments: