The end of a medical condition.

Joe was going through his "Santa wish list" the other morning while I was driving him to school. Many of his wish items weren't a surprise to me. Balls, pucks, sticks, nets, another marble run set, books, etc. came rattling off his tongue. He was contemplating how Santa made all of the toys, how he obtained plastic, how he assembled them. He then started talking about Santa's "magic" and how Santa can "magically" obtain those "hard to get items" or those items you thought were spatially impossible to load on the sleigh, or cram through the chimney, or to position in your home.
As Joe is just yammering on and on and on about Santa, I am listening. I am trying to take note of any items that are "must haves" from Santa. To be honest, I am also thinking a "for f*ck-sake it is the day after Halloween dude and already we are moving onto Christmas?". My profane thought feed sequence was then abruptly stopped, when I heard Joe continue to talk about Santa's "magic" and his biggest "wish" was for a CURE. And. He thought maybe, just maybe, Santa could pull that off. A CURE.
*Gulp*

In the four years since Joe has had Type 1 I have always been very cautious in this territory. The "Cure Territory" is dangerous I think. Have we participated in JDRF WALKS? Sure, absolutely, whole-heartedly. My husband has chaired two of them. Our family has volunteered our time to help organize three of them. We have assembled large teams. We have raised, thanks to our friends and family, tens of thousands of dollars over the years to help "fund a CURE". I have always been careful in what I say around Joe during the fundraising, the letter writing, the Walk Kick-Off Luncheon, and in general about a CURE. You see, I have never wanted him to think there is anything "wrong" with him per see. I have never wanted him to think something about him must be changed or fixed to make him "right". I have never wanted him to count on a CURE in his lifetime. I don't want him to be disappointed.
My hope flickers like a candle in the wind. Sometimes it burns strong when the wind lets up a bit, but for the most part it is a slow, barely visible burn. I have posted on my hope for a CURE. Here is part of what I had to say...

....I think "hope" means different things to each of us. It is a personal thing
to choose to have hope, what one is going to have hope for, and if they are
satisfied with the journey of having hope.

For one to have hope they need to be able to envision positive outcomes and
they can even see the pathways in which what is "hoped for" is achieved. Many
persons with diabetes have said to me that they have been "promised" a cure for
years. "A cure is just 5, 10, 15 years away". Years and decades come and go, yet still "the cure" eludes medical researchers.

I look at the path of hope and the path to a cure as a "stairway". You
need to have your footing on each step to progress to the top, to your
destination. With each discovery regarding type 1 treatment, with each finding
of a new technology, with each failed "cure" scratched off the list of what
researchers are currently working on we take a "step" up the "stairway" of hope;
up the "stairway" toward a cure....

So, back to my dear Joe. He is practical. He is mature in many ways beyond his years. I think in his heart of hearts he knows there is no way that even Santa can muster up a CURE. But, together, someday, sometime, maybe not in my lifetime, possibly not in Joe's lifetime, but in future generations perhaps the elusive CURE will be found. In the meantime, we must all work our way up the "stairway" one step at a time. Research must be funded; potential CURES investigated; failed theories crossed off the list; new hypotheses studied; more trials conducted. Each trial, each tribulation, each setback is a step in the right direction.

So, after I visited Karen's Bitter-Sweet yesterday I asked Joe's permission to place his picture and his story on the Diabetes Research Institute's Banner for a CURE. Joe was "in" on that action.

Here is the photo with what Joe wanted me to type.. Go check it out.

A day-in-the-life of working and hoping our way up the "stairway" to a CURE. To "magic".
Posted by Unknown at 4:59 AM 17 comments: 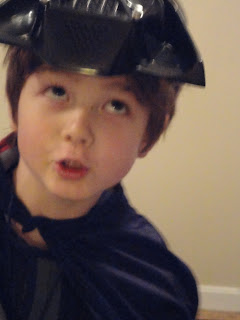 It seems, no matter how hard I try to convince myself and others that we can live like "everyone" else... we cannot. It doesn't make me sad any longer. I don't even know why I try, honestly, to pretend that type 1 doesn't change things for us. It does. It is a fact. It is what "it" is.
While watching Joe gyrate like and electrocuted squid during a game of "Freeze Dance" at a Halloween Party Saturday night, my son's vigor for life reminded me of myself. To the Maher side of the family, it resembled my "mexican jumping bean on crack" dance at Megan and Santiago's wedding this past summer. Joe lives life to the fullest. He immerses himself thoroughly into anything that looks particularly "physical" , "dangerous", or "mischievious".
Parties tend to be difficult for Joe from a blood sugar management standpoint. Not only does he partake in foods that he would not normally consume, but the activity component comes into play as well (an 80% reduction in his basal insulin AND extended boluses are frequently utilized). The said Halloween Party was no exception. Joe consumed about a cup of apple cider, a doughnut, a cookie, and half of a cupcake and then proceded to dance his little heart out. AND. I don't just mean move around a little here when I say "dance". Every hair follicle, eye lash, phlange, cell, and...well you get the picture, was involved in Joe's uniquely constructed gift of movement.
He became sweaty. This is Joe's "norm". After hockey - sweaty. After PE - sweaty. After recess - sweaty. Sleeping - sweaty. Dancing - sweaty. This is not a reliable indicator of a low for Joe. However, the sweat-laden Joe came over to the clown glasses-donning witch, otherwise known as me, to let me know we should do a blood sugar check. He was 113, with a hell-a-lot of IOB (Insulin On Board - based on the time and quantity of the last insulin bolus, the pump software keeps track of the insulin remaining in the bloodstream). No problem, more cider for Joe. Joe resumes with the dancing. I continue to watch Darth Vader and the crew enjoy themselves by spazzing out to the beat then "freezing" as silence took hold.
Fast Forward 20 minutes, give or take ----> -----> ----------> ------------------->
Joe is splayed out on the dining room floor, head in my lap, pale, pasty, sweaty, limp. His blood glucose is a mere 61. Not a shocking low by any means. I guess the 15 grams of juice he consumed 20 minutes prior helped alleviate a larger drop. I am now, once again, a fucking life sized "witch" PEZ dispenser pumping out glucose tabs like the Duggars produce children. Nausea then clouds the picture. Joe is gonna "blow" according to his body language and his complaints. Good friends scurried for barf buckets. Barf bucket cradled, I am hoping the puke-fluke fades. I am not wanting to break-out the "icing to the gums rub technique" or any "Glucagon Mini Dosing" for the party-goers. Luckily the nauseousness subsided. Joe felt well enough to walk to the car. We headed home.
As I tucked the Evil War Lord...ahemm Darth...Vader... Joe into bed. He states in his slightly lisp-kissed sweet voice, "Mom, I over-did myself tonight". I explained to him that I knew how he felt. Vigorous dancing with a full stomach can make mommy feel like "death ate a cracker". Furthermore, I cannot even imagine how a low thrown into that nasty, crap-on-a-stick feeling compounds the symptoms.
The night then delivered highs (up to 403) that would correct and then would skyrocket. Joe woke in the high 380s, with large ketones, before hockey practice early on Halloween morning. More insulin was given, water was pushed, and Ketones were minimal with-in an hour... Joe still wasn't feeling right and only lasted about 15 minutes on the ice before we packed-up and headed home. I don't know if he was fighting something or if it was the continued carnage from the party.
I am beginning to realize that Joe is going to have to work just a "bit" harder for all he wants to "squeeze" out of life. Whether it be fun events, physical challenges, or intellectual hurdles ... life isn't just gonna open up for Joe to just live it. He, and we, are gonna have to work that much harder to reap the rewards. Unfortunately, at times like this I am left with some uncomfortable emotions to deal with. Once again, I find myself feeling a little bitter at the unfairness of it all. For Joe. It isn't a gracious quality. I find comfort that Joe seems to take it in stride and I hope I will continue to learn from the example he sets. 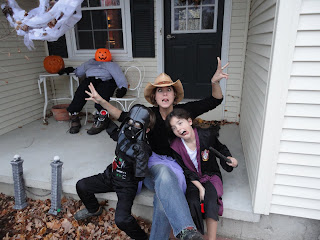