"MOM, I CAN'T WIN THE EMPIRE WITH YOU CHECKING ME" 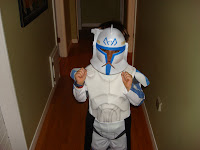 Weekend mornings are hockey mornings in the Maher home this year. Joe has really shown an interest in this sport. He has practices every Saturday and Sunday morning with the "Blue Crew." These practices have been a huge challenge in the blood sugar management department. Not only is it a very physical sport, but they rotate practice times...so sometimes Joe eats breakfast before he goes to practice and sometimes he does not (Have I mentioned how diabetes control thrives on "routine"?)...anyways, with insulin on board from breakfast, he tends to go low even with many grams of carbohydrates for "free" (this means no insulin coverage) right before he plays. Yesterday, I gave him a really low dose of insulin to cover his carbs for breakfast and he ran in the 300s and 400s during practice and after. So, when we got home I gave him insulin (only 1/2 the dose recommended) to try to get his blood sugar (a 420) down. He was playing Lego Star Wars on the X-Box...typical weekend morning stuff in our home. I go to check his number a couple of hours after the bolus and he is using both hands on the X-Box controller...he emphatically states "Mom I can't win the Empire with you checking me." Ha ha...does it get any better than this...really? "Of course, Joe "win the Empire" ..."just do it in a few minutes-OK?" A couple of minutes later, Empire won and all, Joe did his blood sugar check and he was a beautiful 183.
Empire Conqueror, NHL Hockey Player...whatever the goal..."Go For It Joe!"...we'll be by your side supporting you and cheering you on.
Posted by Unknown at 5:54 AM

I am telling you he needs a cape. I love you and him. Brigey too. These posts are heartwarming and FUNNY! Love you. N