DEXTER and a PUDDING "Roll in the Hay" 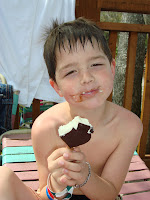 Again, another exhausted morning post after a "wild ride" of a night. I am chuckling and in good humor though and was laughing during the pudding incident.

Note...for non-D friends...a normal blood sugar number is 80-120. We try to keep Joe's blood sugar between 90 and 200 at night. A true LOW, is a blood sugar less than 70 for a young child.
Joe was running a little LOW yesterday evening, I had given him some glucose tablets to boost up his number before going to bed. A couple (8 grams) usually does the trick and buys us blood sugar points so that we are not chasing "lows" all night...sadly for me, this was not the case in the wee hours of the morning.
Usually at night, when Joe is low he will chew on Glucose Tablets while he sleeps. Unfortunately, there were no more glucose tablets to be had in the Maher Household. CostCo is not currently selling them, so I didn't pick any up this weekend. Trust me, I will be heading out to the drugstore this morning to purchase the coveted sugar.
Anyways...back to the story...
I know you are on the edge of your seats wanting to know about the PUDDING.
At 1:30am...I am woken up by my snoring husband, who is sleeping off a Stanley Cup Playoff win by the Detroit Redwings. I decide to check Joe's number and then hope to sleep through the rest of the night. Dexter is running right on (BG=127/Dexter=121) with a diagonal arrow down...which means Joe's number is slowly dropping. I decide to give a glucose tab...and am hoping not to hear from Dexter for the remainder of the night.
YEAH RIGHT, all good plans get foiled...
2:30am rolls around...beep...beep...vibrate...vibrate...YEP, you guessed it! Dexter is calling. I stumble out of bed, eyes half open, shuffle to Joe's room, peer at Dexter...bummer...64 with a stable arrow. I go to the kitchen...glucose tabs are now depleted. I think of my good on-line D-mom friend Meri (HI Meri!)...and her "pudding" solution to nightly LOWs. I had bought some a couple of weeks ago thinking I might want to give it a try. So, what the heck...I pull out the CHOCOLATE pudding, grab a spoon and head into Joe's room.
Now, I should take pause and let you know...I didn't really go over this plan with Joe at all and he is a VERY DEEeeeeeeeeeeeeeEP SLEEPER.
So I scoop up the pudding...I am trying to wake Joe just enough so that he will take in the sugary-goodness. Nope, not gonna do it...in true Joe style. Joe's gonna do what Joe's gonna do even while sleeping. So I try to drag his limp carcass up to a sitting position. I didn't want the pudding to surprise him...and for him to choke on it while laying down. The zombie-like flail-y (not a word I am sure) noodle, otherwise known as my son, won't BUDGE. So I tried to place the spoon to his lips with just a touch of pudding, thinking he will like the taste and just eat it in his sleep. He took a small amount...like a teaspoon. I decided to cram a little more in his mouth and Joe resisted, turned his face, which is now smeared with Chocolate Pudding by the way, and proceeds to get it all over his pillow case and sheets. Turning and dodging his head away from my persistant but fruitless attempts, the "smear-fest" continues. This went on for a couple of more minutes...me scooping, trying to entice the slumbering Joe, Joe refusing, the sheets becoming more and more soiled with the chocolate. So I scrapped that plan and went for the juice and a straw. That took me a good 5 minutes to get into him...but FINALLY I had Joe sugared up and was able to go catch some Zzzz's.
...for an hour and then...
3:30am ...you guessed it...beep...beep...blah...blah...blah. OK I am up. Dexter is alerting me that Joe is now 55 (yep, confirmed by a blood glucose level of 61)...so I went the juice route again...no biggie this time.
And for the grand finale...the final beep that woke my tired, sleep-deprived self up for the day...6am...beep...beep...beep. Another LOW ALARM, Dexter saying 55 - LIAR! His blood sugar was 140.
So I am up, sharing with you my PUDDING "ROLL IN THE HAY" with Dexter...who is a liar ...and interrupted my precious sleep. At least he cannot cheat.
I'll be doing laundry today and maybe, just maybe I should discuss with Joe the "Pudding Plan" before executing it next time. For those of you who don't live this way...our lives are truly so outlandish...you cannot make this stuff up. Another story of the day...ahemm...or should I say...the NIGHT-IN-THE-LIFE WITH A CHILD WITH TYPE 1 DIABETES.

I love you guys. This was funny as most of your posts are. YOu are a good writer! Maybe write books one day? :)

I was chuckling. Haven't tried the pudding yet, we only do Juicy Juice boxes, which are little gifts of liquid gold. I cannot imagine that my Grace's bedroom would look like a crime scene after she got done smearing the pudding all over everything as she attempted to eat it. I applaud you for getting the job done!

Pudding Rookie! Only vanilla pudding at night! Chocolate is always a disaster! LOL!! Honestly I can't do chocolate without a mess and my boys are pudding pros. Vanilla, in, out, no mess. (oh uh, kinda feelin like this is my fault now, crap!)

It might not have been funny in the middle of the night, but it was sure funny to read. I can just see the pudding smeared on his face and bed. Reminded me of a time, shortly after Jack was diagnosed, when we tried to use Cake Mate to treat a low. Jack is like Joe in that he's a very deep sleeper. We would squeeze that little tube of sugar and Jack's lips would clamp shut. We couldn't get him to eat it. We ended up with a sticky mess.

Ever try gummy worms? Jack will chew those in his sleep. I'm not a fan of the ingredients, but Jack will eat them, and in the middle of the night, that's what matters.

Have a great day! xoxo

Yes a total "pudding rookie" here in Vermont. I will get Vanilla next time...haha. It was so funny, I didn't care that I was exhausted. Still laughing about it today.

ABM, Penny, Heidi...it was hysterical...it did look like a chocolate murder scene by the time we were done.

Had to laugh! I tried Meri's little trick too, and also bought chocolate, and there was smearing and resisting and by morning when it had started to dry, it looked like some kind of small animal was sacrificed in his bed.
VANILLA! Okay then. That makes sense. :)

I'm always shoving M&Ms into Emma's mouth in the middle of the night, and she doesn't even wake up. How do they eat in their sleep?
Hope the vanilla pudding is a success!

Reyna, you crack me up! I could just picture the whole scene going down in my head. We use banana for Elise and all we have to do is hold it up to her lips, and she starts chowing down. I've almost lost a finger a couple of times!

:) This post made me smile...although I dislike knowing you were up so much in the night. Every time I walk past the pudding at the grocery store...I always think of Meri! :) I just haven't bought any yet because once I do, I'll have to hide it from the rest of my kids! :) Good to know that chocolate is a BAD idea! :)

YEP~ it's all Meri's fault (lol)
This is funny. I am glad you tried it first so I can learn from it :)

Ok - seriously - I was laughing so hard I was crying!!! I had to stop and wipe the tears so I could finish reading! Why? Well - you are VERY funny, but thats not entirely it! I could SEE it!!! We have been there with Jacob... he is also a VERY heavy sleeper. The whole "The zombie-like flail-y noodle" description is so RIGHT ON!! LOL
We do juice... pudding scares the crap outa me... especially afer reading this! LOL

Donna...you are killing me!!! I am laughing at you...and 'the pudding scares the crap outa me'...we so need to get together IRL sometime and share some wine and some good laughs friend.

BTW still laughing about the "pudding incident" from last night...I am exhausted and the kids are a little under the weather so we are having a nice mellow PJ day.

hoping Joe has on clean PJ's for his PJ day!
I'm always laughing the morning after as I see the aftermath of what new method we've tried with Isaac's low...he refuses most foods while sleeping, and we've woken up to see smears of blue gel frosting in odd places!

Been doin' the shuffle with you the last few nights. We're alternating between high nights and low nights... Last night was low, then lower, then low enough, so I juiced him. At breakfast he we a little high, so we corrected. At lunch, at school, he was 3.4 (61) D'oh! Damn D.

Marc...so comforting to know that I am not alone doing the shuffle...and that we are all in this together.

Although...sorry that you have been up a lot lately and that the "number gods" are not gracing you with their love.

Hope it's a better night tonight. I find when Dexter hits those lows, he has a hard time getting out sometimes. 6am is just plain mean. :(

Too funny Reyna!!! You are a true comic queen, although I am sure it wasn't funny at 2:30am! I have never tried pudding for nighttime lows, I mostly stick with the little juice boxes because that seems to be about the only thing that Miss E OR Lil Miss C will take during those crazy midnight hours :)

Hope that tonight will be better and that the "number gods" are smiling down on you!

I love knowing you, my friend. Seriously. What would Blogland be without peeps like you???

I needed a little solidarity after the night I had last night and this sure helped! I'm rethinking my night low treatments and I see pudding in my future!!! :)