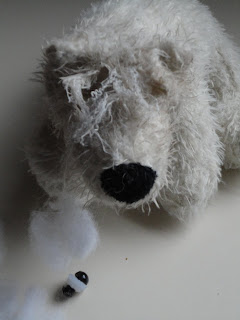 Day 16
As I followed the trail of stuffing that traversed down the stairs and into our kitchen, my thought feed was as follows: "Is it the bald eagle with the talons that Oscar loves to chew on? Is it the calico kitty cat with the tattered whiskers? Or Is it the jingly ball?" ... that I believe to be a baby toy that Oscar has a strong affection towards.

I arrive at the carnage. No. It is not the bald eagle. It is not the kitty cat. It is not the ball that jingles. It is LuLu, the polar bear. As I attempt to clean up the mess of gnawed up eyes, cotton entrails, and a globeless, eyeless LuLu, my mind takes me back. It takes me to a time when LuLu had diabetes.

You would not know it to look at her. Would you?

It was about 3 and a 1/2 years ago. It seems to be a lifetime ago. A time when Joe was a chubby faced pre-schooler. A time when Thomas the Tank Engine had a permanent set-up on our coffee table. A dark time for me. A time I have stuffed into the recesses of my mind, hoping to forget. It was a painful time.

LuLu wore a insulin pump that I had fashioned out of a an Animas printout. I had laminated it and tied it around LuLu's waist. LuLu wore a set in her bum and the tubing was attached to the pump printout. LuLu had her paws pricked for blood sugar checks. LuLu received multiple shots daily. LuLu's care was diligently documented in a log for studying and tweaking of insulin doses. LuLu was a "Show-and-Tell" prop on a few occasions. Joe, Bridget, and I would use LuLu's pump "set-up" to show friends what the set looked like and to discuss the regimen of diabetes management.

It is funny how time passes, dulls, and anesthetizes.

We are approaching Joe's 4th year with type 1 this Saturday. I have been acutely aware of my emotions while reading Houston We Have a Problem's blog as they close in on Nate's first anniversary of living with diabetes. I am also struck by the fact that this week is Invisible Chronic Illness Awareness Week. Karen from Bitter-sweet posted beautifully on What You Think You See. You would never know the war that raged in LuLu's body for a time AND you cannot see the battle that we have with "d" daily to minimize the damage that high blood sugars inflict on Joe's organs while we stave off dangerous, and potentially deadly, lows.

One could not imagine, by looking at us, what our day-in-the-life entails.

Lulu did her part to help you get to where you are today, it was her time to go. XOXO

Poor Lulu! May she rest in peace!

Oh how i wish we could be together this weekend. I need a hug from my friend,Reyna.
You and your beautiful family are truly an inspiration to the Houston family.

Thank you for being you and for sharing your awesomeness with me! :)

LuLu sounds wonderful, so sad to see her go. I will be thinking of you tomorrow when we are at our Walk. ((hugs))

RIP Lulu. I wish I could hug you and Laura well all of you D moms, if people only knew.

This fall is just awful for me...Isaac was diagnosed in November but I keep going over how I missed so much last year. How miserable he was and I just didn't get it. I am so thankful that he and your children are diagnosed so that they can receive treatment, however sometimes I wish things were different...like they were before.

We have PumpPal. That's all. She holds him with ever site change and that's his name. PumpPal. He's a monkey.

Ahhh....this kind of made me teary, my friend.

OH NO!! Can LuLu be saved??? It could just be sleeping LuLu with "closed eyes" :)

Man tonight is not a good night for posts, I have been teary with each one and THIS one my friend sent me over the edge! Joshua is not at that point of understanding things but my 4 year old (not D) has a monkey that DOES everything with him and I believe would have D if it were Jax with it not Joshua. Thank you for this post.. it cleared out my eyes for sure!

Thanks for the LuLu love friends. AND thanks for sticking with me through the NaBloPoMo challenge. I feel so supported by all of you. I know it hasn't been easy for you to be with me every day. Your efforts have not gone un-noticed nor un-appreciated by yours truly. LOVE.LOVE.

I loved this entry Reyna - it just totally spoke to me! Something about it .... :-) -Melanie