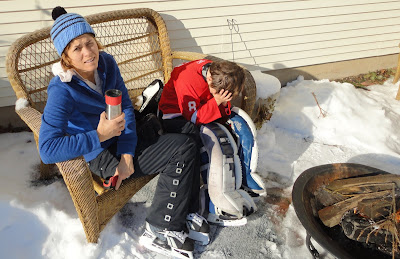 As I was slipping and sliding trying to help Joe sit down, I realized this was not an "ideal" situation. You know, the scenario mentioned in my title. Apparently I should have added that I, too, was on ice skates to really give you the full picture of the precariousness.

Joe had a rough day Sunday. Well "numbers-wise" it was rough. It was a day we had been looking forward to for weeks. It was a day that we had been waiting for. You know those days where you don't have to go anywhere, or do anything? It was a day where we, The Maher family, could hang out in our backyard and skate and sled and listen to Christmas music ... and ... I could carry Joe's heavy carcass laden with goalie pads ...and...I could lug a blade footed noodle legged low Joe across the ice, out of the rink, across yet more ice while still supporting his dead weight, by a fire pit, solo...with skates on.
An hour before, as I looked out the kitchen window I saw skate blades facing up. Jow was splayed out on the rink like an elongated starfish. The white texted "Maher" and number "8" on Joe's Red Wing jersey were facing skyward. Joe was facing ice-ward. Joe was low. He had been having some behavior issues on the ice and when Dave checked his number, a "61" was revealed on the One Touch screen. Sugar was dispensed. We continued to skate and play.
Did I recheck that "61" 15 minutes after we treated? You know, like the "Rule of 15s" states? Ah, I'd like to say "yes", but ... no, I didn't. We were skating. Joe was the goal keeper. I was taking shots on him. I lost track of time. We were having fun. Hell, he should have been OK...right? Dave just gave him 20 grams of sugar.
Then...
No ascending and descending in octaves "mmmooOOOMMM I FEEL LLLoooowwww!" The voice that we all know, that Joe is low "low voice".
No verbalization of the low. All of a sudden he sits on the ice and says "I cannot skate any more". Huge red flags go up and alarms go off when Joe says he cannot run, skate, sled, bounce, careen, bike, scooter, boogie board down water slides, skateboard with cones attached to his appendages. He is low...he is low NOW and he is dropping.
So...
I don't know why I didn't just leave him on the ice, but I decided to lug him to a chair...I lugged the cinder-block outfitted in ice skates and hockey gear with goalie pads across the ice, out of the rink, by the fire, and positioned him in a chair while wearing skates myself. I guess in my idiotic thought process, I felt he should be "comfortable" while low. Apparently being cold, laying down on the ice while low was not an option. There was no more sugar left in my coat pockets. I knocked on the kitchen window giving Dave the "thumbs down" signal, the one we use for "Joe is low" when we are not within audible range of one another. Dave ran out with sugar and then grabbed the glucometer. 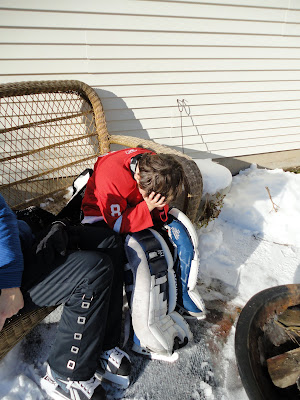 Joe was shaking. His head was down, supported by his quivering hands. It was an ugly low. The type that, thankfully, doesn't happen too often. But when it does, you are reminded that this disease will have you down on your knees begging for mercy time and time again.

Maher family rule number 5,674: Don't smack your sister with a flying hockey puck when she is inside the nets of the goal.

Ha! Joe is one smooth hockey playa. Can't wait to watch him in the NHL. As for Bridget? I expect see her in the Olympic skeleton event. ;)

And the best for last? Thet photo of you and Joe with a low needs to be the international photo/symbol/poster for T1 diabetes. Seriously. Joe's body language screams 'low' and the exhaustion on your face is spot on. The fact you are holding a thermos of what I assume to be coffee (maybe it's vodka?) makes the picture that much more realistic.

OMG! that's MY low position!
wherever I am, whatever I'm doing, if I am low you will find me slumped over in a chair with my head in my hands.

Yeah.... That pic says it all. I'm sorry you had such a sucky low. Poor kid- you can tell he's miserable. As soon as I'm on a real computer, Ill watch the vids!

Oh, those lows are the worst! The jittery, jello-y legs and the inability to do anything about it...Joe is so lucky to have you there with him, Reyna! There isn't another mother in the world who could keep up with Joe the way you do!

For us, any type of winter activities mean lows. I'm not sure if it's the extra sugar that is needed to stay warm, but it's so much worse than summer activities.

Thanks Hallie and Scully.

And, @ Cindy...I think I should rent the little troll out as a weight loss plan. haha. And I use the term "troll" lovingly.

I **love** that you have a rink in your backyard! That is so cool! Loved the videos!
Poor Joe...he looked so miserable. :(

This made me cry. I know I should be all too used to what fucking D can do but still it breaks me. Hes an amazing kid. With such life and spirit and you can tell him Im so proud to know him and his mama. And when hes old enough to swear ''diabetes is a huge douchebag who can suck it and then choke on it'' love u lady!

I hate those lows. Every now and then Bekah gets one where she lays down and complains that she feels yucky. Those lows make me cry inside and curse D. You are amazing at keeping up with that extremely active boy! I can see NHL in his future! I'll be cheering him on! GO JOE!!

Those "bad lows" are the worst!!!! They suck and I'm sorry they messed up what was supposed to be a wonderful day for everyone. :(

Yeah, I agree an ice rink in your backyard is cool as. (adding the "as" is Kiwi speak, I'm tryin' here).However, I don't do well with ice and snow....but I still think it's cool.

I know how those bad lows feel....I talked to Maddison the other day about different feeling lows...weird how some dont make you feel so bad and some just kick you to the ground and render you useless for awhile...

"Apparently being cold while laying down on the ice was not an option." Isn't it interesting how even in the moments of panic and stress we're still thinking of how to make them comfortable, how to keep them well despite the fact that THEY NEED SUGAR NOW! I find myself doing this often with Isaac and sometimes TJ gives me the "you're crazy" look, but hey when all are okay at the end of that day than it's fine, right? The worst for Isaac is when the low then leads to headaches and nausea which seems more common with lows then highs for him.
Can't wait to hear more stories of your rock stars this winter...I wish we were much closer because I know my kids would LOVE to play with your cuties and then I could even give you a much needed break once in a while :)

I can totally feel that headache! Nothing feels like a low.... poor kid! You guys look so sad on the bench. That just isn't fair. I hope you guys get feeling better and back out on the ice! I LOVE the videos!!!!!

Hmm, hate those lows, and I have no idea why we don't think rationally when they are low like that. Over the summer we went on a family bike ride, I didn't think to bring any sugar with me, big mistake about 2 blocks from home she went low. I not thinking left her with dad and rode home fast for sugar then rode back. After she had the juice I thought to myself, "Hello! Why didn't you just go knock on the door of so and so's house and get something?!" She went low right by the houses of 2 families who we are very familiar with and they would have given us something, no questions asked. DUH!

That just sucks. i so dislike when D steals the fun our of stuff like that. I often (if ever) follow that rule of 15 thingamajiggy.

Poor kid, I can't even imagine how it feels to be that low. :( Sorry that D had to spoil everyone's day.

You must find some time to share how to build an ice rink in your back yard. :)

Love the videos thanks for posting. Dang on the Low side of things, just Dang and sorry.

That picture breaks my heart. Poor Joe. Poor all of our kids.

Loved the video's. I understand you not wanting Joe to be cold and low too. Sorry about the low but you do a great job of keeping the family time special. XOXO

Yeah...that picture speaks volumes :( I took the girls ice skating this weekend for the first time ever, I thought of you often :)

Miss E hovered in the 90's the whole time...even after eating a small piece of cake with no coverage! We took a lunch break and I got the girls corndogs and french fries...yikes! That would normally shoot their numbers to the moon, not that day! Miss E went low about 1 1/2 later and we had to treat with juice :(

It was interesting for sure, but I would do it again in a heartbeat...they had a BLAST!!! I just wish lows weren't a factor, it was a learning curve for us for sure.

Love the videos and I am SO jealous of that backyard rink ;)

Jonathan is sitting next to me as I read this and I think he put it best: "51 is yucky".

Reyna - Joe is so lucky to have you watching over him. He gets to be a kid and you've got his back.

That picture broke my heart.

One of those times that it really hits you what our kids have to deal with.