As I picked up the pizza-grease-laden pump (yes, as in insulin pump), I outwardly sighed and firmly stated "we are having a 'family moment' here".

I may or may not have said something about "losing my $*%#" at some point during this story.

I missed the lobbing of the pump, but I had a feeling it was coming.  Joe was frustrated.

He had just played a 45 minute hockey game.  His team hosted a Canadian team.  As the host team, we provided pizza, brownies, and drinks for both teams.  Joe's team loitered about the pizza table for quite awhile, waiting for the Canadian team to join them after the game.

Joe was hungry.  He skated hard.  His blood sugar was dropping.

I asked Joe to check a blood glucose.  He sat down to do so.  His POD and PDM started donging off; the bad-kind-of-donging-off that means the POD has failed.  The warning message was something about the time needing to be re-set on the pump.  Joe attempted to re-set the time.  Well, when you re-set the time, the POD gets deactivated. This is a new one on me.

Joe wanted to eat.  He needed a new pump site (or to inject insulin, which he refuses to do) in order to eat the 3 slices of pizza and brownie that occupied his plate.  He was not impressed.  Guess what, I was not overly-psyched either.

Joe did not want to insert a new site at the rink.  He asked if he could do it in the car.  Fine.  He grabbed his food and we made a bee-line to the car.

I was holding the food hostage in the passenger seat, as Joe got his pump site changed.  I was driving.  He filled his POD with insulin.  He then said something about the time on the PDM being "a.m." and not "p.m.".  It was 12:58p.m. in the afternoon.

"Let me just insert the POD, it's fine."

"But then the POD will be deactivated again.  I don't have another POD."

I think this is where the pump was "greased".  I asked to see it; the PDM. Yes, the driving on the highway was still happening.   Joe chucked the pump to the front seat.  I looked over to the passenger seat and the pump was plopped atop a slice of greasy cheese pizza.

Desperation.  He just wanted to eat his pizza and brownie.  I got it.  He was hungry.  We were over 30 minutes away from home.  He opted out of spending extra time with his teammates and the Canadian team, due to not wanting to deal with the pump site change at the rink. 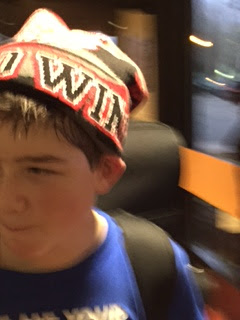 The pump was handed back to Joe.  I requested he wipe off the grease.

"Go ahead and eat.  We will put in a pump right when we get home and bolus then."

He was 70-something when we arrived home.

So familiar, but without the Canadians or pizzas.
Thank you to Joe for allowing this story to be shared.

We had this issue with our pdm several times in the last few weeks. (Finally got a replacement the other day - yay!) Seems like it always happened at the most inconvenient times. Every time.

Yes! You can change the time without changing the POD. This was different.. An alarm stating something about the time needing to be entered. The PDM defaulted to midnight and the POD failed with this alarm.