"Did it bother you?"

A couple of afternoons ago...

Joe was sharing about his school day.  He had a substitute teacher in one of his classes.  His Dexcom started donging off "Meep-Meep-Meep style" indicating a low I presume, from the history of numbers. 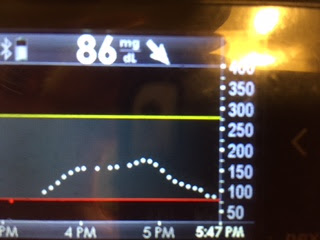 One of Joe's classmates started teasing Joe...stating he should put his "cell phone" away.  The students were trying to rattle the sub, not tease Joe per-se.  Another Meep-Meep-Meep and from the sounds of it, the substitute teacher was not impressed with Joe and his ding-donging cell phone.  She asked Joe to put his cell phone away promptly or she would be referring him to the Principal's office.

Joe then took a deep breath and went into the abbreviated version of he has type 1 diabetes and the ringing noise was from his continuous glucometer called a Dexcom.  Joe said the substitute then apologized and he added she was quite nice.

This is the third time something like this has happened this year.

I admired Joe's willingness to openly explain his medical condition and the technology that accompanies it in front of his peers to the substitute teacher.  He didn't appear to be too bothered by it.  To him it's part of it, of having t1d, the explaining himself.  Frankly, he knows no differently.

He will be put in this position where he needs to explain himself; to stand up for himself; to advocate for himself.  I think that is part of life for all of us.  Society does not need to handle Joe with kid gloves.  Friends, family, and strangers should feel comfortable to ask questions in a respectful manner.  I suppose... I guess what kinda bothered me about this situation for Joe is it was a potentially embarrassing scenario he was left to deal with, on his own, during the already awkward-y place called Middle School.  Not.Too.Cool.

I figured if I could lessen the frequency of events like this it was worth a try.  So, I emailed Joe's school nurse and requested the teachers add a note about his CGM to their sub binders.

Trying to save him a little bit of explaining about his day-in-the-life.
Posted by Unknown at 4:39 PM

As a "sub" I am often saddened by the state of many teacher's sub folders. However, I have been consistently in one MS and a girl there whom has one kidney and gastrointestinal conditions carries around a laminated paper that is quite small maybe half a note card sized. On this card the nurse has stated without being specific that Julie Jones has a medical condition that makes it so she needs to be able to have free access to the restroom. Signed Nurse Nancy. That is it. So, just another idea if Joe wants to have a little "card" that he can show the sub in case his teacher(s) aren't as organized as they should be. I think this just allows the student a little more control over a situation that isn't always ideal with all that goes on in MS :) Have a lovely week.