While "Cutting The Cord" has a nice ring to it, I think perhaps they could also name it "Losing The Leash".  Joe switched from the Animas Ping to the Omnipod yesterday.﻿
﻿ 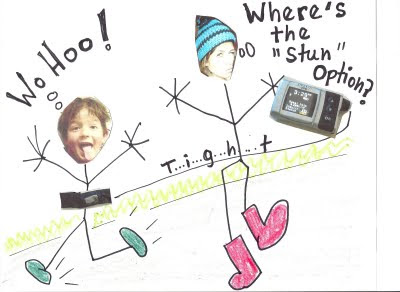 Originally ... six and a half years ago .... when I chose a pump, I was making that choice for a three year old.  I was making that choice for a three year old on very minuscule amounts of insulin.  I chose Animas because of the pump's ability to give basal insulin in 0.025u/hour increments.  I also recall there was some IOB issue with the Omnipod at that point, as in ... it.didn't.keep.track.of.it.  We have been happy with the Animas Ping: great customer service, minimal site loss, minuscule amounts of insulin delivery.  What I did not love about Animas was how Joe almost off-ed himself on accident, by inserting a full cartridge that was connected to his body into the pump with fully advanced piston, while he was at school...not the pump's fault at all...user error, but still scary.  We also had some "loss of prime" issues, which actually led to the previously mentioned almost off-ing himself issue.  Joe was trying to fix the pump issue at school and did not want to embarrass himself by disconnecting the tubing from the site, which was inserted in his butt cheek.  All-in-all though, we have been loyal Animas users.  Joe wants to try out life without a fanny pack strapped around his waist.  Joe wants to try a life without bulky plastic-y devices shoved in his pant pockets.  I understand.

So...here we are...here I was yesterday...pre-programming the Personal Diabetes Manager (PDM) for our pump start.

Joe has never inserted a pump site on his own during his history with diabetes and pumps.  Yesterday, during his pump start, he did it.  He drew up the insulin.  He filled the POD.  He cleansed the site area.  He adhered the POD to his body.  He pressed the button on the PDM to "insert".  We hugged...yet another "first".

After the pump insertion, Joe went back to the lobby of the clinic.  There are computers out there.  The Rep and I continued to go over pump questions.  As  I was scrolling through the "temp basal" section of the Omnipod, I asked why it only went up to a 95% increase in basal.  I was explaining that I would crank Joe's basal up by 125% on the Animas Ping for road trips.  I wanted to show her what the temp basal program looked like on the Animas Ping...  I then realized that we had just sent Joe to the clinic lobby hooked to two pumps!  His Ping AND the POD!  Oy!!  I ran out and had Joe remove the Animas pump and his Tallygear belt.  He smiled and simply stated "Freedom".

Back to the temp basal...so I showed the Omnipod Rep the Animas pump's temp basal program.  She stated the POD could not go over a 95% increase.  I'll figure that out with bolusing or making a new basal program for travel days.

Now that Joe is "free", he is requesting a break from Dexcom.  He doesn't want to be tied down by carrying the receiver.  I have been quite liberal with Dexcom "breaks".  I told him that I preferred he wears it, but he doesn't have to wear/carry the receiver all the time.  He's been tied down to equipment for 70% of his life.  He is respectfully asking for a little break.  I get it. 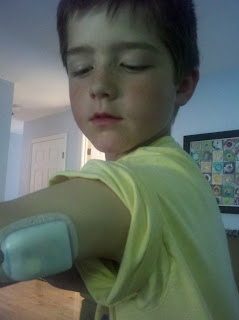 A day-in-the-life of loosing the visible leash...the invisible leash remains, DIABETES.
Posted by Unknown at 8:29 AM

Same reason Audrey switched, and she is younger then Joe. He is going to love it. I keep track of Dexie at home and she only has to keep track of it at school. I hope the pod works out great for both of you. We love it!

Wooo hoooo! You are Pod people now! You can get around the 125% increase that you want by running a 95% temp basal increase, then also doing an extend bolus for the remaining amount. So, it would make up for the remaining 30% that you are not getting through the temp basal? Figure out the amount of insulin, program it as an extend bolus, then run it at the same time as the temp basal. Am I being clear? If not, email me honey.
Welcome to Pod Life!

Holla!! I hope Joe loves the pod as much as A does. It's been such a great feeling of freedom for her. And me! We found the transition pretty easy so hopefully you will too. I fully expected the difference in basal amounts to be challenging at first but it was easy peasy. I had tears the first time I saw her with "no leash". Hard to describe. Happy for you! And btw- I miss you!!

Welcome to podding! We hope you love it as much as we do! I am amazed at how different kids basal rates and carb ratios are...yes, trying not to compare, but my little Natalie's basals are higher than Joe's!

Oh my goodness... no kidding Reyna I have been considering the exact same thing here... switching to the pod. Just yesterday I ordered the demo kit to see the new, smaller pod--- when we considered it last time, we felt it was just too big and protruded too much and worried that it would just rip right off if she bumped something. I am tired of Animas, though. Their tech support has been great but everything else sucks, so... we shall see. Good luck and please keep posting about this new experience. --Heather

How exciting!!! Welcome to the pod world. I hope you guys love it. I know that we could never imagine going back to being "tethered" :)

I am sure the POD will be great for both of you. Love you, Mom

Welcome to the pod! Bean, and the rest of us, love it and have been very happy with it.
No need for shame in the basal rates!! Bean had an alternating every hour one for a while because that's just what had to happen. And I LOVE that I can program rates each hour because sometimes that's what the body needs!
Good Luck! And happy freedom to Joe! :)

Can't wait to hear about a day in life with the Pod! xoxo

Yay! I just switched to the Pod myself in December, hated it at first (ease of bolus, not!) and I didn't like the buldge so much, But, I just got my shipment of the new WAY smaller pods and let me tell ya, I feel like I don't even have Diabetes cuz there ain't a pump attached to me anymore! Loving it! I'm so happy to hear Joe is free now too! I know super Reyna will figure out the basal issue, though it surely does suck having to figure it all out!

I have a feeling somewhere down the line (pretty shortly) we may be switching to the pod...but with his 2-4am basal at .025 we're not quite ready yet. Can't wait to hear more about the transition for you and Joe. Can't remember if it was ever an issue, but let me know how his on/off with the pod goes in terms of skin sensitivity...this is where we're a little extra cautious for Isaac as he is super sensi. Oh, and swimming with the pod...sounds so liberating to not have to attach, remember to take it off, blah, blah, blah. Okay, really enjoy being of the leash :)

We are currently switching from Medtronic to Animas Ping. I really wanted my daughter to go with the pod, but she wasn't interested. Our only reason for switching is that we've moved from Illinois to Florida and so now she spends so much time swimming, so we were looking for waterproof. I thought she would love the freedom of the pod, but she is a competitive gymnast & didn't want the bulge of the pod under her leotard. Good luck!

Hey there! Yes, I just put a sheet of bounce in the box with the pods. I read it somewhere else and figure it can't hurt. I have heard of some wiping the pod down with the bounce sheet, but I don't do that. I have sprayed her with anti static spray prior to a bounce house, but really we had NO problem at a bounce house and she is a crazy girl at those places. I think our static issue happened when she went down the slide and she also happened to be wearing a sweater dress that I had not washed before. (I always wash our clothes with downy fabric softener so that helps too.) I assume Joe won't be wearing any sweater dresses. :-) Don't worry, it's only happened twice for us in a year....knock on wood.

Justin only wears cargo shorts... they have been our best friend since dx. He sticks Dex right in the pocket. Maybe that would help "free" Joe while wearing his CGM.

HI, Reyna! I've been reading your blog for some time now, and mark the blogs that have a lot of good "what to do in this situation" info. I think you're one brave D-Mama to help Joe find a way to do all the things he loves (hockey, snowy adventures, etc.)
We also are switching to the Pod, so I read your blog with great interest. I'm just not sure about the filling the pod with 80 or 85 units of insulin, as my daughter doesn't need that much insulin. I hate to think of wasting so much insulin...but will see when I speak with our educator.
Hope all continues to go well!
Jessica