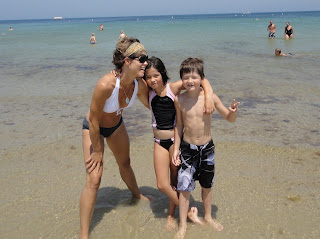 Sometimes, in this life, I feel the rules don't apply to me. Like the Rule of 15's... sometimes I tweak that a bit. Or, like a month ago ... when I was going 32mph in a 25mph zone and I got pulled over by the Fuzz, I immediately asked the officer for a reason as to why I was being detained. He gave me a little guff and then let me know. I was internally eye-rolling my Lancome fringed eyeballs and internally muttering a "For goodness Sake isn't there like a 10mph grace-speed with the whole speeding thing?".
Well...

I found out why, the hard way, you are supposed to use that little plug-cap that is enclosed with the box of Animas Insets. Now, don't get me wrong. I did, at one time, use them. I used them for every bath. I "plugged Joe off" for every dip in the pool or the lake. I did...years ago. Truly, I did.

When you are dealing with diabetes and the non-stop routine and management you start to cut corners a bit. Or... *ahemm*... at least I do. I count carbs down to the gram, I pop sites into Joe as sterile-y as possible, I mother bird like a pro... but apparently I cannot be bothered with this cap-thingy. Frankly, I haven't used it in years. We have never had an issue due to my plugging exclusion. No infections. No clogs. No anything. It was a corner I was fine with cutting in the grand scheme of things.

Back to the story...

We are vacationing. We are visiting Cape Cod.

Yesterday was the first time Bridget and Joe have ever played on an ocean beach. There was digging. There was castle making. There was crab saving. There was a pump~site~clogged~with~beach~sand. And. Once again, managing Type 1 in Joe's life provided us with adventure and the ability to effortless-ly entertain any on-lookers ... and trust me...there were a few.

Here is how it went down:

Joe emerged from making "low~tide~crab~sanctuaries" for a blood sugar check. 5~4~3~2~1. A 156 was obtained. He wanted to munch on a few potato chips. Fine. I am not a carb~tight~wad, as many of you know. I figured I would let him have a few chips for "free", but would plug him in and crank in a couple of hours of basal before he went back to wave-jumping and crab-saving. I go to plug in the pump tubing to his site. I line it up and start to insert it...it falls short of the "click". I flip it around...try to cram it in again...no "click".

The Removed Site (note the tan color in the set) 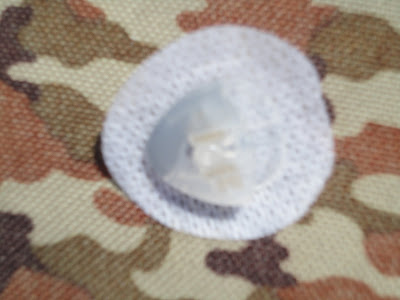 The pump insertion site was filled with sand. Joe calls for a site change and exposed his cheek. Dave was my assistant. I needed one. Slapping in a site in the middle of a wind-swept, sandy beach requires some mad pancreating skillz. IV 3000s were blowing in the breeze...IV Prep was precariously placed on a towel ... We used the old cartridge. It still held about 36 units of insulin. And, we used the old tubing too to avoid the whole unloading, re-loading, and priming steps that the pump would require.

Once the site was in and 2 hours of basal were given, I looked in Woodchuck #2 to see if we had a plug. I did have a plug, but it was for the Contact-Detach system. It didn't fit the Inset. Dave then MacGyvered the system by using the connector off of the new set. He went all "rodent~like" and chewed off the tubing. We then plugged the new site with the connector and covered the whole set~up with the IV 3000. 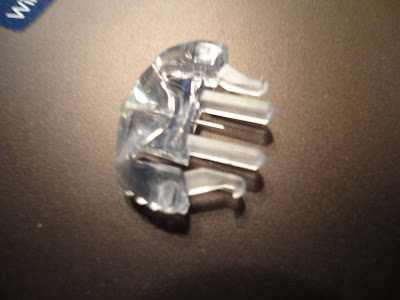 A day-in-the-life of realizing the rules are there for a reason... sometimes.
Posted by Unknown at 7:50 AM

You totally MacGyvered that situation! I know nothing of a cap, since we are tubeless, but ROCK ON Reyna!
Have fun at the beach!

You.crack.me.up. Period. Enjoy your vacation. I am so happy those kids made it to the beach! No summer is complete without an ocean excursion. Enjoy! - R

Oh yes we have discovered sand and pump sites don't mix, even with the 'cork'(as we call it!) on. All in a day of sun, sand and Diabetes!!

Oh my word. Too funny Reyna! And that pump tubing is tough - I hope Dave's teeth are OK. I have been dragging around extra caps for when we lake swim at the cabin and this weekend - get there and have ZERO. WTH? Well I hope the rest of your vacation only needs regular pancreating skillz.

Oh and you are one hot mamma in that pic! You look awesome! :)

What are these rules you speak of?? Did you get a ticket??

The beach is the only time I plug... Justin anyways.

Hope you guys are having fun :)

I was at the beach the other day, sand really does have it's way of working itself into EVERYTHING doesn't it?!?

You guys look so happy in your beach pic, and mother-bird - you look AMAZING!!!

What a great picture of you guys! And your skills are GOLD! Last time I was at the beach with a pump, my site got filled with sand, too, that stuff gets everywhere. The beach is rather tricky with diabetes. I try to run 150-180 when I'm there because of how fast lows come about in the water. Hope all continued well!!!

Its amazing how MacGyvere-like we can become! As for the plugs...I have seen them in the bottom of the box but like you, we never use them. Now I also don't have a child who plays in the sand anymore but he will soon be at the age that a cute girl could pursuade him to do so so I will have to remember to grab one for the next beach trip!

Now THAT would have made some fine vacation videotaping! I would have LOVED to have seen it!

For the record - we didn't plug Sweets (unless we were at the beach). I hear you on the corners. Most of the time it's fine but sometimes they reach out and grab you!

Glad you're having fun!!!

I am taking a quick beak from our vaca to catch up on blogs and I am so glad I did! I had no idea what that "plug" was. I thought it was an extra piece kind of like the extra button that comes in the little bag attached to shirts when you buy them. Thanks again for educating me friend! Happy travels!

We used the caps for 10 years, and then went to D camp and found NONE of the other families used it...so we were like FORGET THIS! We don't need caps!

And it's only bitten us in the butt one or two times since. So now...I lean towards the caps for swimming. Not for showers though.

Rules? Who the freak needs rules! In this D world we are thrown into, we are forced to make up our own rules!

Awesome MacGyvering! My husband can do the rat thing too. What is up with that?

Yup, beaches and site-changes...total pain in the neck! Good job. I'm such a crazy rule follower I probably would have redone the cartridge and everything...HELP! =)

So good to see some of your summer fun! (totally jealous of the bod...man I need to DO SOMETHING!!)
What a bummer about the sand, but it provided another awesome site change story! ;)
I'm generally a rule follower, but have been known to cut my fair share of corners!
Hope the rest of the vacay is awesome and as calm as it can be! :)

that is some impressive MacGuyver skills my friend!! Very cool!

Oh how I wish I coudl add audio to the comments section. It woudl scream a big fat 'ol cat call atcha!!!!!

You McGyver with the best of 'em, honey.

okay so you know we dont have a pump but in regards to rules I say they are there to be guidelines right?? we all have to do what works for us.. (including going a little to fast)
Let me say though that your picture is FAB U LUS!!!! Joe has one hot momma Pancreas!!! Have a great time on your Vaca!!

Nicely done! Richard Dean Anderson would be so proud!

That has SO Happened to us!! We were rinsing and swishing a bottom with bottled water (no food allowed on the beach!!) Ugh! And I had no site change stuff with me! I learned the hard way about the plug. : (
But you? HILARIOUS!! I hate being pulled over too-my husband swears there's a 10 mph grace, but not for me!
ps-you guys are SO CUTE! LOVE that picture!! : )
THanks for making me laugh!!! xoxox

The plug has a needle?

Did the wind interfere with getting the adhesive on flat?

#2) What the heck kind of RN are you...leaving a site uncapped -- HELLO INFECTION...terrible, horrible things could happen!!! SHEESH!

PS...We've NEVER used the cap. EVER. Not even in the beginning. NADA.

Thanks for the head's up :)

Same thing happened to me last summer when I was vacationing in Myrtle Beach. Sand in my infusion set. THAT'S when I started using the plugs too. I still don't use them though, not for around the house and showering. I love the rat-like dedication Dave has. :)

First off...I may never wear a bikini again after seeing that pic. Holy hell woman! What do you DO? It CAN'T JUST BE RUNNING...do tell.

Second and more importantly, what is this cap you speak of since we are Pinging Newbies??? EMAIL ME PLEASE.

Consider my eyes OPENED! I had no freakin idea what that thing was for..now I know! I feel like a dunce!! I am so envious you were/are on the Cape. My family went to South Yarmouth every year for 2 weeks and my some of my happiest childhood memories are from our summers there. XO!!

we use them because otherwise Isaac screams that we're doing it wrong...he is a little careful of his site as he wants to make sure he'll NEVER have to have an extra one due to my mistake, it's actually kind of funny. And your post gave me all too vivid of a picture of your husband gnawing on that tube...you crack me up lady! Glad you guys are on vacay enjoying time together!

AWESOMENESS! Seriously, rat-like chewing is where I lost it! I was on the Cape a few weeks ago and came back telling the fam we totes need to go there. Now I know not to forget the caps. It's a public service you're providing! :)

Awesome problem-solving dear!! We have not yet taken D to the beach...I hadn't even thought about the sand! Will make mental note to pack plugs, but in case I forget I will know what to do!!

We never use the caps either....except when we have played on the beach! Of course we have also had a cap get stuck on the set due to the sand. So basically if sand wants in, it will get in! ;-)